A reporter mice for calcium imaging

A reporter mice for calcium imaging

Calcium imaging is a technique that is definitely coming to age, and fancier and fancier genetically encoded indicators are constantly being developed.

Different approaches have been taken for in-vivo imaging, some of which rely on the use of an optical fiber, or “fibroscope”, which is then attached to a (generally two photon-) microscope. This is clearly an invasive method and limits the observation to the limited zone of action of the fiber. Another less invasive approach is to use long working-distance objectives to image an exposed region of the body: this has been succesfully used, for instance, to look at dendritic spine plasticity in the neonatal brain over several days through a transparent window in the skull (Gray et al., PlOS Biology 2006). However, this also involves very delicate surgery and allows imaging over a limited area.

The approach recently described in PlOS One by Rogers and colleagues, instead, is completely non invasive. They generated a transgenic mouse line expressing the calcium sensitive protein GFP-aequorin in an inducible manner (through the use of a floxed-stop approach). 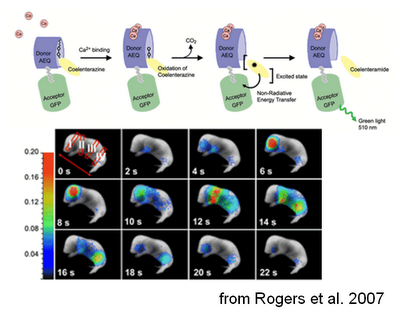 The reporter can therefore be targeted to the cell type of interest just by crossing this mouse with a line expressing Cre in that cell type. In the presence of Ca2+, the aequorin part of the probe can oxidize a substrate called coelenterazine, producing luminescence, that in turn excites the GFP, making it fluoresce. The idea is then to inject coelenterazine and look at the GFP-generated fluorescence. This method allows whole-animal imaging, although this obviously comes at the price of a lower spatio-temporal resolution (which is still pretty good in my opinion).

And indeed, it seems to work quite well! When GFP-aequorin was targeted to the mitochondria and expressed in muscles, it allowed imaging of mitochondrial calcium during muscular contraction. This was tested after an “artificial” contraction following tetanic stimulation, in physiological conditions, such as the spontaneous muscular activity in newborn mice, and during an induced “pathological” condition, kainate-derived seizures. To see the system in action I strongly advice to have a look at the cool videos attached to this open-source paper.

In summary, this approach allows a non-invasive and quantifiable whole animal imaging of physiological and pathological states. It may also be a very interesting indicator for measurement of the metabolic state of a certain tissue, apoptosis and many other processes that depend on calcium. Of course the next step to this would be to have such a system working in freely-moving animals. Are we really so far away from this? I don't think so, expecially as the same group already published an article about it (Roncali et al., J. Biomed. Opt. 2008)!

Nicola Romanò is a neuroendocrinologist, interested in the analysis of the electrical/calcium activity of hypothalamic neurons governing pituitary hormonal secretion. He presently studies the neuroendocrine control of the prolactin axis. He also writes on the Inside Neuroscience blog (in Italian) on MolecularLab.it. As an "imaging person" he loves photography.