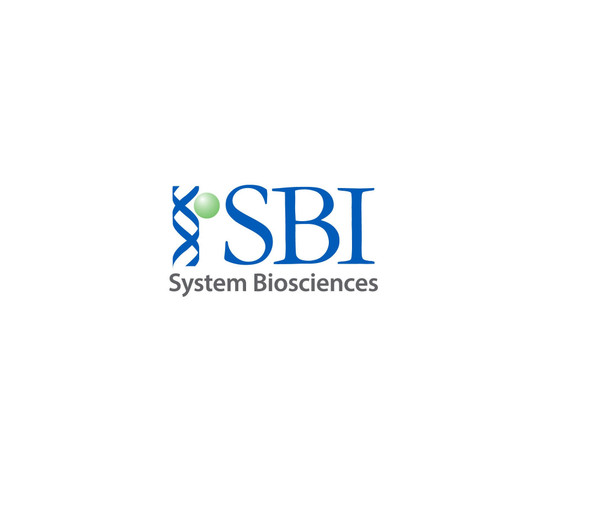 We have recently released our most advanced EV isolation system to-date—ExoQuick ULTRA—unmatched combination of yield, purity, ease of use, and cost. Learn more.

While the ExoQuick® family of reagents speed-up and simplify exosome isolation and are compatible with most downstream uses, some applications are especially sensitive to carry-over of non-exosomal proteins—applications such as mass spectrometry, Western blotting of low abundance markers, exosome labeling, and in vivo /ex vivo exosome delivery. Which is why SBI offers ExoQuick PLUS.

Less is more—ExoQuick PLUS and ExoQuick-TC PLUS for when you need an extra level of confidence:

With a simple treatment of our ready-to-use, customized ExoQuick PLUS Microspheres (kits contain enough ExoQuick and pre-packed Microspheres for 10 reactions*), you can obtain highly pure, intact exosomes suitable for a variety of protein-sensitive applications. Total hands-on time after ExoQuick isolation is less than 10 minutes! 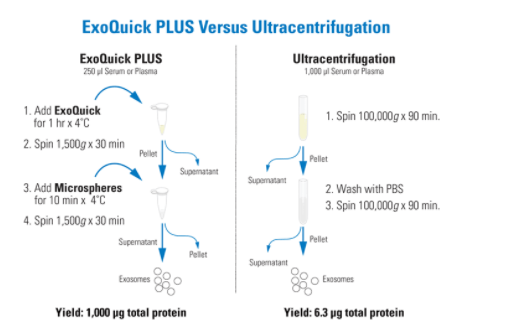 ExoQuick PLUS can be used to purify exosomes from plasma1, serum2, and malignant ascites3. With a simple workflow involving minimal hands-on time and low input sample volume requirements, ExoQuick PLUS is an excellent option for researchers who need to purify multiple exosome samples and/or samples from small animal models or clinical research samples that will then be used in sensitive downstream applications.

You can verify the presence of exosomes with a number of different methods, including Western blotting for general exosome markers (CD63, CD9, CD81, and HSP70), NanoSight analysis, or EM (learn about different ways to detect exosomes and more in our Exosome Basics Guide).

ExoQuick PLUS and ExoQuick-TC PLUS provide efficient exosome isolation with reduced protein carry-over, resulting in isolated exosomes suitable for most sensitive downstream applications. 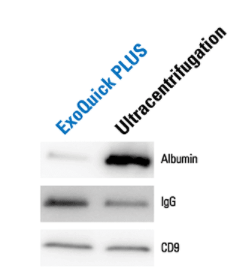 Figure 1. Exosomes isolated using ExoQuick PLUS show dramatically less albumin than when isolated by ultracentrifugation. Western blots of exosomes isolated from 500 µl of pooled human serum using either ExoQuick PLUS (left lane) or ultracentrifugation (right lane). 1.5 µg of total protein was loaded in each lane. The Western blot was probed with antibodies to CD9, an exosome-specific marker, and antibodies to two proteins typically found in high abundance in serum—IgG and albumin.

Figure 2. ExoQuick PLUS exosome isolation results in samples with less protein carry-over than competitors’ products. For each lane, 2.5 µg of total protein was loaded. A. Western blot probing for serum albumin, IgG, and the exosome-specific tetraspanin marker CD9 shows higher CD9:IgG and CD9:albumin ratios in the ExoQuick PLUS lane than in the competitors’ lanes. B. Ponceau staining to assess total serum protein abundance shows the least amount of carry-over protein in the ExoQuick PLUS lane. 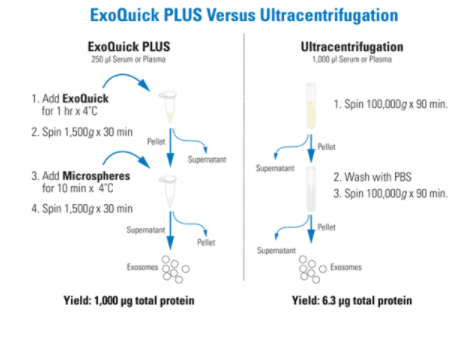 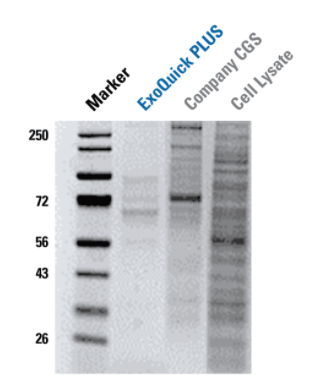 Figure 5. Exosome isolation with ExoQuick-TC PLUS results in cleaner preparations. ZetaView particle size analysis of exosomes isolated from cultured RPMI 8226 cells using either ExoQuick-TC PLUS (left panel) or a competitor’s kit (right panel). The red double arrow in the left panel indicates a broad shoulder of particles too small to be exosomes (< 50 nm in diameter) which are likely to be undesirable protein aggregates. These contaminants are not present in the exosomes isolated using ExoQuick-TC PLUS (red double arrow indicates the same particle diameter range as in the right panel). Data courtesy of Richard J. Jones, PhD., MD Anderson Cancer Center.